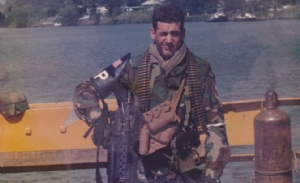 Robert J. Lytle, Jr., age 42 of New Milford, tragically took his own life on July 12, 2010 at his home after suffering silently from Post Traumatic Stress Disorder since his honorable discharge from the U.S. Army as a sergeant in 1993. Rob was a combat war veteran of Operations Just Cause and Desert Storm. While his family and friends may never fully understand Rob's pain or all of the circumstances involving Rob's passing, we do know that he loved his family above all else, Lori-Ann, his wife of 12 years; his beloved son, Alexander John, 10, and his cherished (and ridiculously pampered) dogs, Foster and Max. Rob was a graduate of Brewster, N.Y. High School and the U.S Army Military Police School. During his Army tenure, Rob served with the 411th MP Co., 720th MP BN in the Emirate of Kuwait as a member of Task Force Freedom earning the Kuwait Liberation Medal. He participated in the Joint Task Force - GTMO, Guantanamo Bay, Cuba, earning a Humanitarian Service Medal and as a member of Joint Task Force South in Operation Just Cause, Panama. Rob was especially proud to have been awarded The Army Commendation Medal in 1992 for exceptionally meritorious service as a member of the 411th MP Co., Fort Hood, TX . An avid fan of the Military History Channel, he was honored to have fought to secure the freedoms Americans enjoy. After leaving the Army, Rob pursued a career in the U.S. Bureau of Prisons where he achieved Honor Graduate status in 1993. Rob worked at MCC New York, FCI Waseca, Minn., MDC Brooklyn and FCI Danbury. He truly loved his work and his BOP family and was thrilled to have been recently promoted to lieutenant at FCI Danbury. His time there was far too short. Rob's wife owes a special debt of gratitude to the inmates incarcerated at FCI Danbury in 1994 as they played matchmaker and convinced Rob to ask her out on a date In his free time Rob enjoyed spending time at the local VFW reminiscing and riding his Harley Davidson. People devastated and mourning his loss include his parents, Robert and Geraldine Lytle of Danbury; his siblings and their spouses, Jennifer Vuolo and her husband, Edward of Brewster, NY, Sean Lytle and his wife, Gina of New Canaan, and Aileen DeVeaugh and her husband Jon of Waterbury; his in-laws, George and Helen Lalak of Bridgewater, as well as several nieces and nephews and many, many other extended family members, friends, neighbors and co-workers. The family will receive friends in the Lillis Funeral Home, 58 Bridge St., New Milford, on Sunday, July 18th from 4 to 7 p.m. A Mass of Christian Burial will be celebrated at St Francis Xavier Church in New Milford on Monday, July 19th at 11 a.m. Burial will follow at St. Francis Cemetery, New Milford. In lieu of flowers, Rob's wife is suggesting that donations be made in Rob's honor and memory to the Disabled American Veterans Charitable Service Trust, 3725 Alexandria Pike, Cold Spring, KY 41076. This non-profit group provides services to veterans with PTSD.